My sincerest apologies for the lack of communication.. It’s been very crazy lately.

You all know how I love the pizzas, and this time I’ve made a mozzarella stuffed pizza (and I did not cheat when it comes to making the pizza base!)

For the dough base:

Start by mixing the the water, yeast, olive oil and sugar in a cup until it’s dissolve.

Sieve the flour and add the salt, if you have a big enough surface, I would suggest mixing the dough in your kitchen counter, but if you don’t, use  a large enough bowl that you can use to mix the ingridients. Don’t feel discourage just because you don’t have the space to.

Gradually bring in the flour from the sides of the bowl, and keep mixing until you have a smooth springy dough.

Place the dough in a lightly floured bowl and cover it with a damp towel to proof for one hour at least.

Once the dough has risen, you can divide it in 4 pieces and wrap in cling film and freeze the pieces you’re not going to use straight away.

I’ve cheated and used a rolling pin to roll out my dough into a perfect circle. I would usually do it the traditional way however because we want to stuff the crust, we got to make it look nice.

Put the rolled dough on a grease proof paper sheet and neatly put grated mozzarella on the edges of the rolled out dough and slowly fold the edge over the cheese and press down.

Top the dough with the passata sauce first, then some more grated mozzarella, the meats, some more mozzarella (never enough cheese!) and finally the chopped tomatoes.

Cook the pizza in the preheated oven for about 15-20 minutes, or until the crust is lightly brown and the cheese bubbling.

Top the pizza with rocket for some fresh peppery taste!

Try it and let me know how it goes!
Ana X

We all love a good pizza take away! But I like my pizza crispy thin, like a cracker! So no take away pizza will ever satisfy me. This recipe is quick and too easy!

I’ve cheated on the dough and used pizza base mix from sainsbury’s, I can make two thin crust pizzas with one pack. You will need 100ml of water to add to the mix, combine it well and leave it to rest for a bit. While your dough is resting you start on your tomato sauce. For mine I used tomato purée, olive oil, water, 1 shallot and 2 cloves of onion, some salt and pepper. Blitz it in your blender or food processor, I don’t like the the sauce too smooth, so I leave small chunks of the shallot and garlic.

For the filling, I used smoked mozzarella and chili luganica sausage meat, but it’s your pizza so you can use whatever tickles your fancy.

I roll out half of the dough thinly, and fold the “corners in”, spread the tomato sauce, add the grated cheese and then the meat… Then the cheese again! In a frying pan (big enough to fit your pizza), heat some olive oil and transfer the pizza to the pan once the oil is hot. Yes, we are “frying” the pizza base first.

Once the base gets dark, take the pan off the stove and put it under the grill. Make sure you keep an eye out on the pizza, as you don’t wanna burn it.

The cheese will start to bubble and you’re pretty much done once the meat and the crust gets a bit of colour!

If you can get your hands on some rocket, I would definitely suggest adding at the end to give this crisp freshness to your pizza.

Not to blow my own trumpet, but I make a good damn pizza!

I hope you enjoy!

it’s Thursday!!! One more day and it’s the weekend!

I know I should be posting salad recipes and such because it’s basically summer – well no! No in England! I’m joking, it’s alright here! But yesterday I wasn’t feeling very famous, and I decided to make soup for lunch.

I got a bunch of big fat juicy tomatoes, one onion, a bunch of garlic and put them in a tray full of olive oil, salt, grounded black pepper, herbs (bay, thyme, parsley and oregano) and paprika! – one of my housemates Bea is from Hungary and her mother made a fresh batch of paprika for her. Being the foodie in the house, Bea told me about the fresh paprika and I couldn’t resist myself to add it to one of the recipes.

Bake the vegetables until they have softened. Let it cool down and take the skin off the tomatoes – you can keep the tomatoes if you’re too lazy or don’t mind it, I find that it makes the soup smoother.

I shouldn’t have to tell you, but yes blitz the vegetables, and put the mixture in a pan to reheat – now adding the stock/water is to your preference – I don’t like my soup too watery. Once you get to your preferred consistency you are ready to serve – freshly grate a lot of Parmesan cheese on top (yes it’s tomato and Parmesan soup, so be generous with the Parmesan!)

It’s super delicious! I’m sure you can make a few raviolis to go with it or just add some macaroni for your kids!

I had my serving with half of a toasted wholegrain bagel.
Ana x

Today I had a special guest in my house, Matt Wright – he doesn’t really cook… He’s signature dish is beans on toast. So I’ve decided to teach him how to make a nice meal.

For starter we (me mostly haha) decided to make Parma ham and goats cheese ravioli. Baring in mind I’ve never made ravioli in my life – I just mastered the art of pappardelle making the other day.. Ravioli is on a whole other level!

For the filling, we used ricotta, goats cheese and parmaham (flown in specially from Rome thanks to my lovely friend Abi!)

We shaped the raviolis – I did the first one and the rest I let Matt get involved, and I must say he did a pretty damn good job for someone who can’t cook! – We cooked the ravioli in herbs and vegetable stock for about 15min (yes the pasta was a bit too thick unfortunately.. But we learn from our mistakes don’t we?)

Served in a bed of rocket and Parmesan salad with lemon and black truffle oil!

I must say that for first timers, we did well!

I have a bit of an addictive/perfectionist personality.. So when I attempt to make something, I want to be able to make it in my sleep… So as you can tell, it’s the second day consequetive that I’m making this pappardelle pasta.

In this instance I have made the pasta with roughly 100gr of 00 pasta flour and 1 free range egg – the pasta was enough for 1 big portion.

A couple of weeks ago, I went to Borough Market for the first time (it’s food heaven) and got a few different French cured sausages. For the normal Ana, I would have finished the sausages in a heartbeat, however in this occasion one of the sausages is made of donkey meat and pork.. And not knowing which ones are which, I’m playing Russian roulette with a donkey sausage.

Don’t get me wrong, I’m all about trying new meats, but there’s something about knowing that it’s donkey that makes me gag.. Haha

For the bolognaise sauce, I’ve raided my freezer and found qorn minced meat, so I have added this to my bolognaise, which is just basically one onion, half of French cured (hopefully not donkey) sausage, qorn mince and a tin of tomatoes.

I’m definitely going to make more pappardelle, I feel like a seafood one id needed!

Please don’t hesitate to ask me any questions or give me any suggestions!

I tried to make pasta for the first time today and I loved it.. It’s definitely my new addiction.

I was watching “two greedy Italians” on food channel as you do, and they were making homemade pasta with pesto sauce… I have been dreaming of homemade pasta ever since..

Today I made some lamb ribs, and since I had so much left over tomato sauce from the ribs, I have decided to save this for pasta sauce.. Like a cheating lamb ragu.. All the flavors of lamb but no meat just tomato sauce!

Since I haven’t bought a good scale yet, all measurements were done by eye and roughly how I would think pasta feels like

I used roughly 200gr of 00 flour and two free range eggs. Hand mixed the mixture like it was play dough, and rolled it with a glass – since I don’t have a rolling pin either… Once it’s thin enough that you can blow it off from your bench (trick learnt from the Italian gents) your pasta should be ready to be cut. I’ve cut mine with a pizza cutter.

Once your pasta is all cut in pieces, boil a pot of water and season it with salt to your taste. I’ve cooked the pasta for 1 minute and then rinsed it in cold water, this should helpremove the flour from pasta. Change the water in the pot and boil it again, once this is boiled, cook your pasta for another 2 minute and a half (or longer I like my pasta al dente).

In a sauce pan, heat your chosen sauce and add your pasta in for 30seconds. 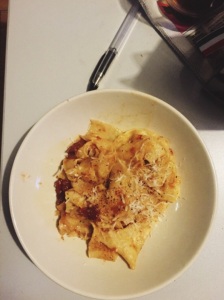 I hope you enjoy your meal